Eastenders know how beautiful Toronto’s waterfront can be. We’re lucky enough to have access to best beaches and boardwalks. Well, big plans are underway to create another beautiful waterside hot spot in the Port Lands.

Today, the mouth of the Don River is prone to flooding and also somehow collects all of the garbage in the east end. But Toronto won’t need the Fab Five for this makeover because Waterfront Toronto has been planning a transformation of the Port Lands for the last fifteen years!

So, what is this ‘naturalization’ anyway?

No, it’s not some kind of new green-washed face product hawked by your high school friend who joined a MLM; it’s the Don Mouth Naturalization and Port Lands Flood Protection Project (DMNP).

The goal is to naturalize the mouth of the Don River to reduce flooding risks. Similar to a mid-2000s makeover movie, the change will not only transform the area, but will also reveal that she was a secret princess all along.

The flooding in August of last year was a reminder that our city just isn’t using protection — flood protection, that is. If Toronto is hit with another Hurricane Hazel-level storm, that would mean the Studio District and most of Leslieville could suddenly be swimmable. 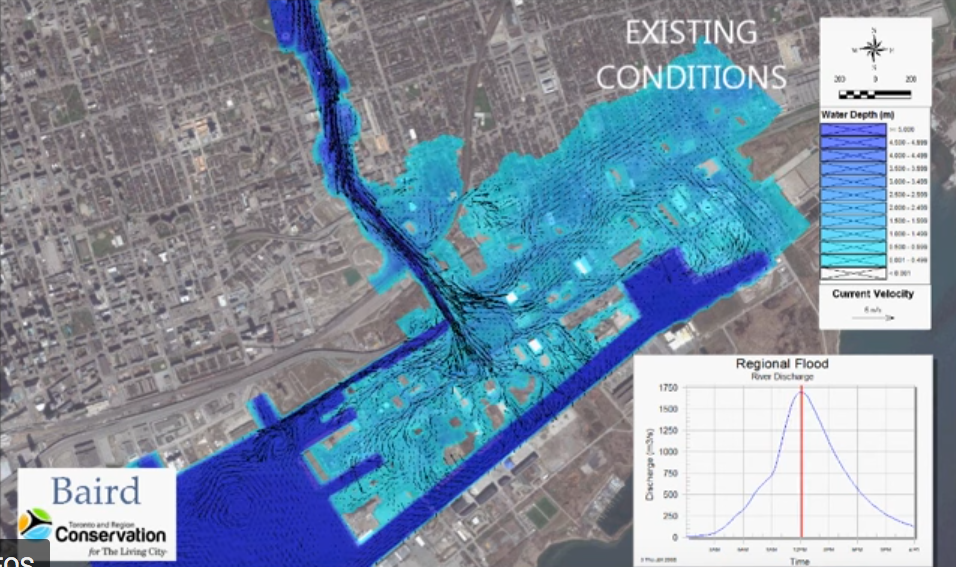 Projection of the extent of Hurricane Hazel-level flooding at its peak river discharge (Waterfront Toronto, 2017).

As part of the naturalization project, Waterfront Toronto is also pursuing remediation of the lands. Remediation is necessary so that 1 million cubic metres can be excavated or dredged and used as fill wherever possible.

Origins of the Port Lands

While the Port Lands were originally marsh and forest, they were transformed in the early days of colonization. The Port Lands were home to sawmills and petroleum storage and this history is still present in the soil. Prior being a home for industrial activity, Toronto and its waterfront were traditionally a place of trading and commerce.

In the 17th century, the Dish with One Spoon agreement, a peace treaty was enacted between the Anishinaabe, Mississaugas and Haudenosaunee, to share the land of what is today Toronto.

Yet, in the years since, settlers have not been kind to the waterfront.

Corktown Common is an example of what the Don River may soon look like. The Common was rebuilt in 2012 to direct rising storm water away from neighbouring Canary District real estate area. Corktown Common uses a “flood protection landform”, which is a fancy, layered hill — sort of like a layered cake, if cake could be structurally sound — to direct storm surges away from the shiny new condos. (Per Waterfront Toronto) 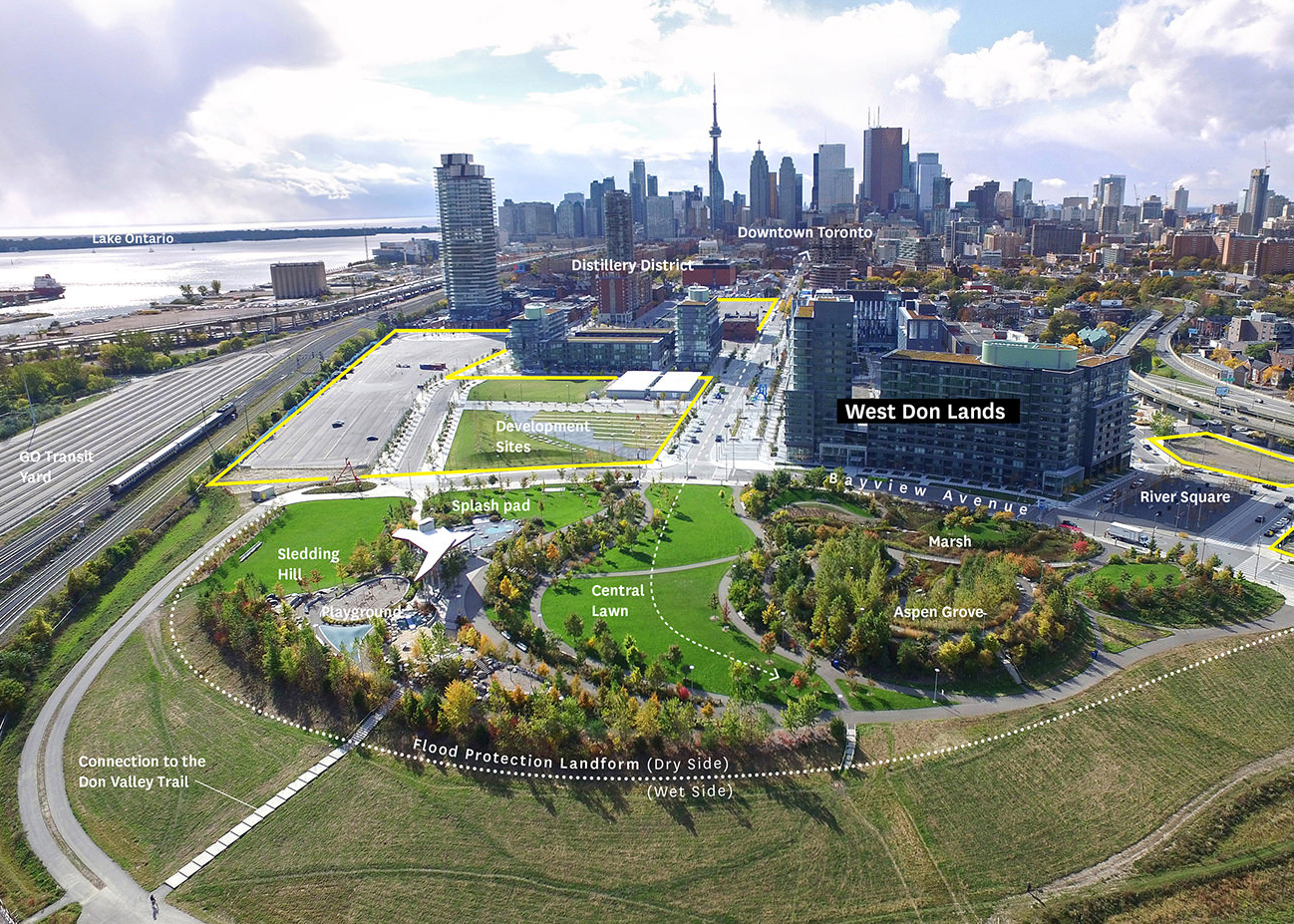 The project involves the creation of two new outlets for the Don River and the transformation of 290 hectares of land. New bridges, roads, and pathways will open up the neighbourhood. Two new parks will take up 29 hectares in the naturalized area and an aquatic habitat is planned at a size of 14 hectares. The naturalized area and the aquatic habitat combined will be about the same size as Riverdale Park East and West.

For East-Enders, particularly Leslievillians, this will create a new destination park and enhance the existing path network. The project will bring big changes to the road and transportation network to the Port Lands.

The full vision for the project includes everything from new playgrounds, a dog park, picnicking spots, event space, and a multi-use field. New programming ideas include locations for fishing, water taxis, kayaking and canoeing, snowshoeing, and cross country skiing. This project will not only protect the city from extreme weather events, but it will also effectively create a High Park for the east end.

As the city continues to grow, apartments become more efficient, and location is everything, ensuring that new and existing residents have access to park space is essential. Nearby parks with playgrounds can make city living a reality for families with children, and parks are increasingly adding dog-specific features.

The Doug Ford bull in the china shop

The project is planned to be completed by 2024, just one year after the Finch West LRT is supposed to wrap up. Of course, that’s as long as no one mentions it to Doug Ford, who has been on a bit of a project cancellation rampage — or streak — depending on how you look at it. Late last year, the province fired three Waterfront Toronto board members. Who knows what else Doug has in store…

Also, Sidewalk Labs announced in February of this year that in addition to redeveloping the Quayside neighbourhood, they saw the Port Lands as an area for future expansion. We’ll definitely be keeping an eye on this, and of course, writing more about that whole mess in the future, but if Google wants something, you know they’ve done their research into the future value.