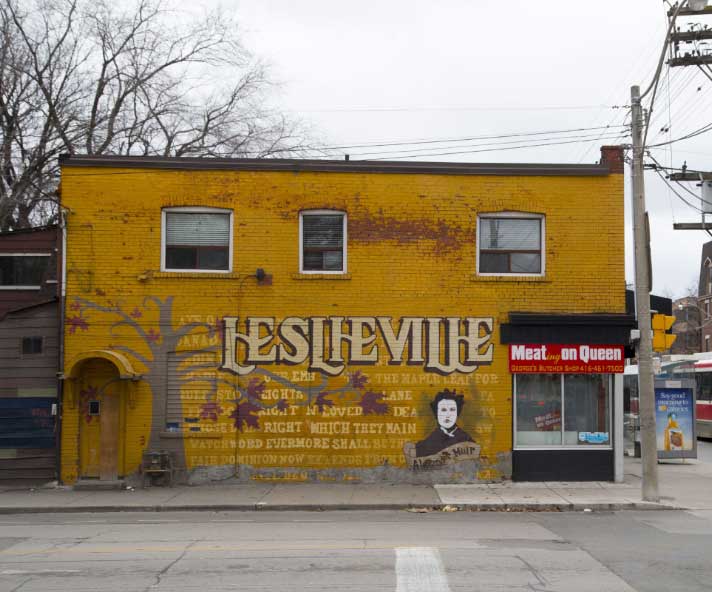 A little back story about Leslieville

Leslieville is one of Toronto’s most loved and most coveted urban communities. Way back in 1849 a man named George Leslie who owned approximately 28 acres of the community for his orchard and gardens also ran the local post office. The Leslie Post Office and the name Leslieville just came together then. Although never an incorporated town, the Leslieville name just caught on and here we are.

I moved to Leslieville first in 2001 into an apartment on Caroline Ave and was hooked. Now, as a Realtor in Leslieville for over 10 years (almost 12 actually) I’ve been almost exclusively focused on Leslieville Real Estate my entire career. However, as my business has grown over the years, I’ve expanded to other Urban Communities including: Riverside, Corktown, Canary District, Roncesvalles, King and Queen West, and High Park. Most of my business is however East of Yonge Street.

Leslieville’s proper boundaries start at Empire Ave to the West all the way up to Coxwell (but really I draw the line at Greenwood) or if you use the local BIA’s boundaries, it’s up to Vancouver Ave just East of Greenwood. As a Realtor in Leslieville for nearly 12 years I’ve gotten to know all of my neighbours. I was an integral part of the Leslieville BIA board of directors and started the first East End small business networking group then called Owners of East.You may have seen my pup Cody the Closer and I walking the streets all day and all night as I studied, experienced, and sold Leslieville Real Estate day-in-day-out.

Why invest in Leslieville Real estate With Springteam’s Realtors

There are dozens of realtors in Leslieville and you should work with whomever you feel comfortable with. That’s the beauty of a free market! All I can tell you is I’ve invested my entire professional career and currently stand out amongst all realtors in leslieville within the top .01% in overall sales here.

Take a look at these beauties! We don't go to market until your home is absolutely perfect! That's how we get you 18% more $$$ than local averages.

104 Morse St: An Ideal Detached Home In Leslieville for Sale!

104 Morse St: An Ideal Detached Home In Leslieville for Sale!

Why Sell With Spring

Our listings sell for 18% more than the local average and in less time. Interested? LEARN MORE

Here's a complete picture of what to expect when selling with Spring. LEARN MORE

Get Your Home's Value Now!

In just a few short clicks we'll help you find out what your home is worth. Go for it! LEARN MORE

Why Buy With Spring?

We're so tapped in to the hoods we work in that our Buyers seem to have an unfair advantage when Buying. LEARN MORE

A comprehensive guide to buying real estate with us in Toronto. A must read for ALL buyers. LEARN MORE

There's a lot more to investing than scanning the MLS. Find out why you should be working with us. LEARN MORE