Down with inefficiencies in Toronto!

We’ve had yet another busy week in the ongoing saga between Premier Ford, and Toronto city council.

For those not in the loop, Premier Doug (aka our Supreme Leader) passed bill 5, which cut the size of council from 47 to 25 in order to ‘stop dysfunction’ and to circle back to his only talking point to ‘save taxpayer money’.

We all like to save money, and I think everyone agrees that city council is pretty inefficient.

The main problem with Premier Doug’s strategy is that he announced it in the middle of the election campaign. This brought upon the Premier’s THIRD legal challenge (and counting) and so far he’s 0-2 with one pending…

This week, Ontario Superior Court Justice Eddie Belobaba (great name!) ruled that bill 5 was unconstitutional in that it inhibited electoral fairness, and the speech of candidates (who thought they were running in a 47 ward race)

The justice has spoken, we’ll have our 47 ward election as planned.

Premier Doug said that he would appeal the decision, but also said that he’d invoke the notwithstanding clause. A power that has NEVER been used in Ontario since it was adopted 35 years ago.

The notwithstanding clause allows a government to ignore a legal decision for a five year period, and was meant as a fail-safe to protect against reactionary judges who might rule against public interest. (The Alberta government tried to use it to block marriage equality laws in 2000) The reason it is so rarely used is because it is seen as an affront to the charter of rights and freedoms, and most politicians simply re-write laws to operate within a judge’s ruling.

Wednesday, Premier Doug re-convened the legislature and passed the bill (now called Bill 31)  amid controversy and mass protest with John Tory vowing that the city will consult with lawyers and continue to fight for a 47 ward election as intended. We’re preparing for a very interesting next few weeks.

But, let’s put aside the legal drama for a moment, and focus on the impact of reducing council from 47 to 25, because, even if you hate the way Doug is doing it, lots of people are in favour of it. I for one can name half a dozen city councillors who have no business representing the city…(do we really want a backwards idiot like Mammolitti representing more people?)

What will representation mean in a 25 seat council?

For some context. The city of Guelph has a population of 130,000, and 12 city councillors (2 per ward), I know that it’s unfair to compare cities, but, it seems that a city as large and complex as Toronto has issues that demand more representation than a sleepy college town, not less.

Check out the epic shade thrown at Conservative MPP’s by Gil Meslin in this twitter thread about council representation. 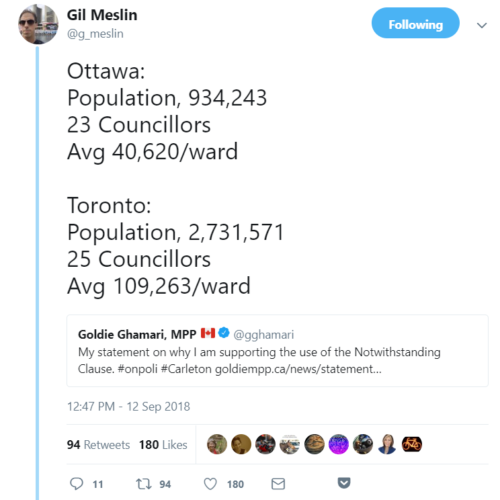 The Premier and others who tow the line continue to circle back on the cost savings associated with a reduction in council. The city has an operating budget of over $11 Billion dollars, per the Toronto Star, the reduction of 19 Councillors, their staff and office budgets equals a savings of $5 per Toronto resident over the age of 15, a drop in an $11 Billion dollar budget, how much have these court challenges cost already?

With city Councillors stretched even thinner, we predict the city will lose even more money as Councillors will be forced to hire additional staff to support these changes, or they’ll simply miss key aspects of governance.

Cutting off your own arms to shed weight is not a solution to make you run more efficiently.

I think a better way to address the challenges Toronto faces would be enacting term limits.  Giorgio Mammoliti (A member of council since 1995) wants to tear down your house (but doesn’t really care to deal with rebuilding, that’s a job for someone not holding a sledgehammer)

Norm Kelly, another longtime council veteran, Septuagenarian and friend of Drake co-opts black culture to sell t-shirts, but votes against programs that would directly help the community.

Both of these Councillors, and a handful of others make an easy case for term limits, as the incumbent advantage of name recognition has allowed them to make a career of being contrarian. It’s also allowed the Ford family to rise from Etobicoke oddities to a viable political power, which is what got us into this mess to begin with.

What do you think?

[𝗩𝗶𝗱𝗲𝗼 𝗕𝗲𝗹𝗼𝘄] Week 26!  𝗨𝗿𝗯𝗮𝗻 The yo-yo continues to bob up and down as sales numbers dip to below 100 with 90 firm house sales…

Week 24: Well that was a short vacation…

[𝗩𝗶𝗱𝗲𝗼 𝗕𝗲𝗹𝗼𝘄] Week 24! Wow, so that didn’t last long. People seemed to take a break from real estating last week but some buyers are…